How to Watch American Netflix in Canada 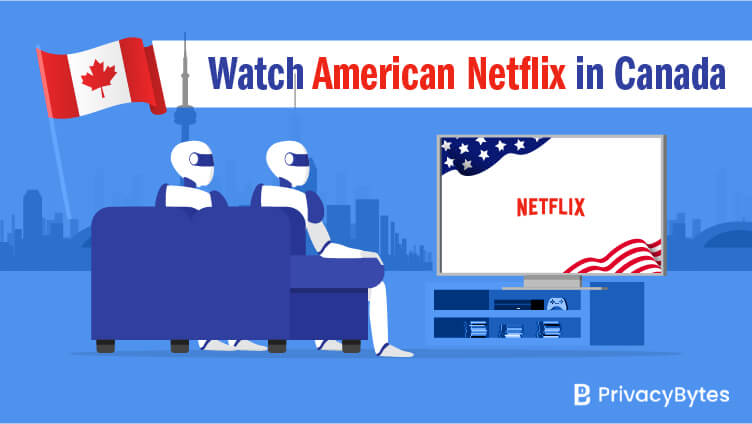 Canada is a fantastic country. It has the longest shoreline of any country of earth, effective universal healthcare, the second cleanest air on earth, it invented hockey… the list goes on and on. But when it comes to Netflix, Canada is definitely not the best.

A recent comparison shows that US Netflix users have access to more than 200 more movies than their Canadian brethren. What’s going on there? Why on earth should Canadian internet users have to pay more when they are getting less?

That is what this article is all about. We are going to tell you exactly how to watch American Netflix in Canada. We are also going to recommend the best tools for the job. You will need a VPN and we will explain why, of all the VPNs on the market, ExpressVPN is the right one for you.

Why Is American Netflix Different From Canadian Netflix?

A couple of years ago, Netflix proudly announced that it was going global. With the exception of Communist China, North Korea, and Syria, they now have a dedicated service for every nation on earth.

But these national services are very different. This is because Netflix has to buy the rights to stream movies and TV shows for each country. And while they would love to be able to stream everything everywhere, the fact is they don’t hold the rights to do so.

This means that every single service is different. Their US Netflix service has been around the longest so, of course, they have been buying up the rights to content in the US for longer. This means there are inevitably more movies and shows available than in Canada.

These rights reasons mean that Netflix has to run separate services in every country. It also means they have to stop people from accessing services in different countries. They do this using a technique known as geo-blocking.

Geo-blocking works by checking the IP Address of every visitor to a website. An IP Address is a code unique to every internet connection which includes information on where that connection is based. If your IP Address says you are in Canada, Netflix will block you from accessing their American service and every other service apart from the Canadian one.

It is actually very simple to get around this geo-blocking technique if you use a VPN. A VPN is an online security and privacy tool. It encrypts your data and redirects all your internet traffic through an external server to help keep their online activity private.

When your data passes through the VPN server, it is tagged with the IP Address of that server rather than your own internet connection. This is the clever part. Because premium VPNs have servers located all over the world, they can be used to pretend you are in another country even when you aren’t.

In other words, a Canadian internet user can connect to a VPN server located in the US and make it appear as if they are in America too. In this way, it is possible to fool Netflix into thinking you are in the US and so unblock American Netflix in Canada.

Yes and no. When Netflix announced its massive global expansion a couple of years back, they also announced that they would be stopping all VPN from accessing their service.

Blocking VPNs is extremely difficult. The only way Netflix can succeed is by identifying and individually blocking every IP Address associated with every VPN. In fairness, they have got pretty good at this and a lot of VPNs are now unable to unblock US Netflix.

But a few have worked hard to either change or mask their IP Addresses and they continue to be able to unblock Netflix despite efforts to thwart them.

All of these are premium VPNs. If you want to try and unblock Netflix using a free VPN, you will be out of luck. Free VPNs have neither the resources nor the inclination to take on Netflix. They have long since given up that fight.

What Is the Best VPN to Watch U.S. Netflix in Canada?

We have tested all the top VPNs to see which is best at unblocking American Netflix in Canada. The results are now in and there was one VPN provider which stood head and shoulders above the rest.

ExpressVPN is the best VPN for watching American Netflix in Canada. There are several different reasons why we have reached this conclusion:

If you do encounter any problems connecting, just switch to another US-based server and try again. There are hundreds available on ExpressVPN and while a few are blocked, most are still fully functional.

Watching American Netflix in Canada is actually very simple if you use a VPN. Our tests have found that ExpressVPN is the best VPN for the job. This is thanks to their fast connection speeds, huge network of US-based servers, and value-for-money service.

In this article, we have explained how a VPN works to unblock US Netflix in Canada and also everything you need to do to set one up.

How was your experience of watching American Netflix in Canada with ExpressVPN? Did you encounter any problems getting things set up? Do you have any questions that we haven’t addressed in this article? Are there any extra tips you would like to share with our readers?

We always welcome comments, questions, and feedback from all readers and we will do our best to respond to everyone.