How to Watch American Netflix in Europe 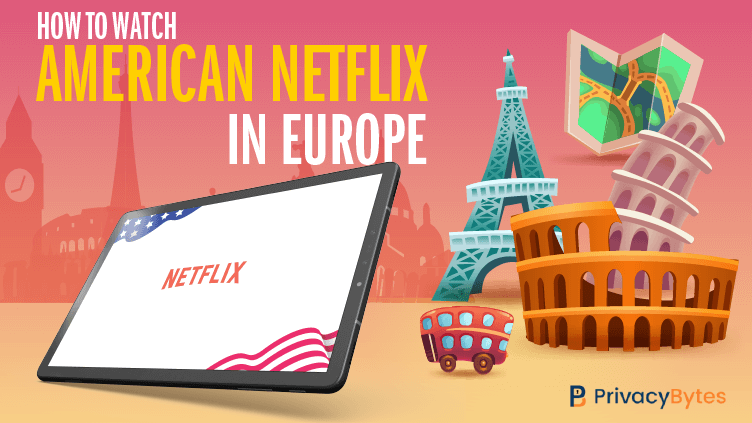 Netflix may have gone global these days, but in most European countries, it is still a relatively new service.

While Netflix came to the UK, Ireland, and Scandinavia in 2012 and the Netherlands the following year, it was not until 2014 that it reached most central European countries and in southern Europe, you had to wait another year still.

These days, Netflix has a service in every European country, but the staggered arrival and recent launches mean that the amount and quality of content on offer varies significantly from one country to the next.

In recent times, Netflix has gone about standardizing its global prices. This has been bad news for many European users, and they have effectively ended up paying more for less. Analysis has shown that many European users are paying above average for their Netflix on a price per-title basis.

It is little wonder then that users across Europe, not to mention the many American ex-pats living in Europe, are keen to access American Netflix instead.

It is actually pretty easy to do this. All you need is a VPN, and in this article, we are going to explain how to unblock American Netflix in Europe and reveal the best VPN to do it.

Quick Start Guide: How to Watch American Netflix in Europe

If you are the sort of person who just wants to get on with watching their favorite shows, then we have thought of you. That’s why we are putting our Quick Start Guide right at the top of this article. Just follow these few simple steps, and you will be watching US Netflix in Europe in just a few minutes.

The only thing you need to think about is which VPN to use. It’s a tough choice, but we have tried to make even that easy for you. We have tested all the top VPNs to see which is best at unblocking American Netflix in Europe. To find out which we recommend, just keep on reading.

Why Is American Netflix Different From European Netflix?

The various European Netflix services are all different from the American Netflix, and the main reason for this is rights.

Netflix buys up rights to content by country. It is not the only player in the market, so it wins some and loses some. As a result, every national Netflix service has a different content library on offer.

In Europe, this can be especially frustrating. It is possible to travel freely between most countries in Europe. But it is not possible to keep using the same Netflix service. Every time you cross a border, the available service changes which is deeply frustrating for many people.

In Netflix’s dreams, they would have the rights to stream anything everywhere. But in reality, they can’t, and the closest they get to this is with the US service.

To find out more about which TV shows and movies are available on different Netflix services, take a look at unogs.com.

American Netflix may have the best content library, but no matter where you are in Europe, you will find that it is blocked.

This is because Netflix is required by rights owners to only make their content available in the countries they hold the rights to. Because every content library is different, Netflix is obliged to stop people from different countries streaming them.

They do this using a technique known as geo-blocking. Geo-blocking works by analyzing the IP Address of every visitor to the Netflix website. An IP Address is like your computer’s home address. It can tell Netflix exactly where you are connecting from.

If your IP Address tells Netflix you are in a European country, you will be automatically redirected to their relevant national service. All other Netflix sites, including other European sites and the American Netflix service, will be blocked.

It is a simple but largely effective technique. But there is one significant loophole that means users can get around this block.

It is possible to get around Netflix geo-blocking if you are using a Virtual Private Network (VPN).

A VPN works by redirecting all of your online data down an encrypted tunnel and then through an external server. The encryption secures your data while the external server helps to keep your data private.

It does this by changing the IP Address that is tagged on your data to that of the server. This is the bit which helps to unblock Netflix.

Because VPNs operate server networks all over the world, it is quite easy to change your IP Address to one from another country. So, if you are in Europe and want to watch American Netflix, all you have to do is connect to a US-based server.

When you then visit the Netflix website, it will be fooled into thinking you are in the USA and so redirect you to American Netflix.

It tries to. But blocking VPNs is difficult. To do it, you have to manually identify and then block every IP Address connected to every VPN.

There are millions of these but, under pressure from rights owners, they have done their best. To their credit, Netflix has managed to block a fair number of VPNs this way.

But the truth is that many VPNs can get around their efforts quite easily. They can either hide their IP Addresses so Netflix cannot see which ones they actually use or they can change them regularly.

Both approaches seem to work well, and as a result, there are quite a few VPNs that can still unblock American Netflix with ease.

What Is the Best VPN to Watch American Netflix in Europe?

So, of these VPNs, which is the best to use to unblock American Netflix in Europe? We have tested all of the top VPNs in several European countries to see which did the best job.

The results are in, and it was ExpressVPN which outperformed all of the rest.

There were several features which made ExpressVPN the standout VPN for the job:

While Europe comes closer together under the EU, their Netflix services are just as divided as the rest of the world. This is why people traveling in Europe and ex-pats living there want to access American Netflix in Europe instead.

With a VPN they can and, as we have explained, ExpressVPN is the best one for the job. In this article, we have explained why and told you everything you need to know to get things up and running. Give ExpressVPN a try today and let us know how it works for you in the comment box below.