How to Watch American Netflix in Germany 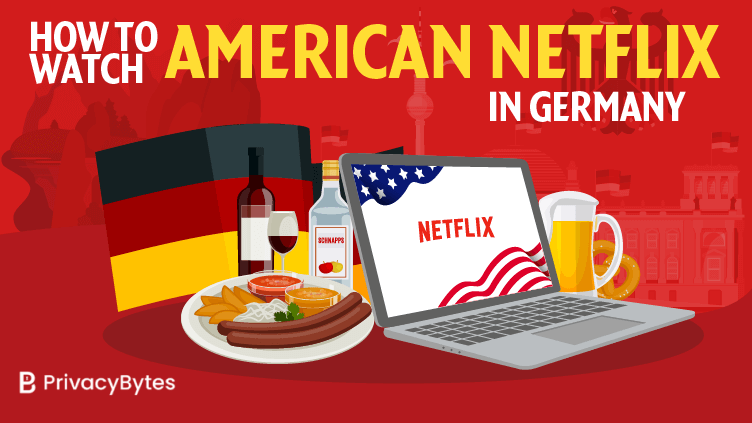 Netflix has performed pretty well in Germany since it first launched there in 2014.

In five years they have managed to accumulate more than 5 million subscribers. This means they have a bigger market share than Sky Deutschland, one of the biggest pay-per-view TV networks in the country.

The number of subscribers continues to grow relatively steadily, but they still face challenges in the market. One of the biggest is the fact that Netflix Germany’s content library is fairly unimpressive when compared to some other countries.

German Netflix currently offers around 2,700 movies and just over 1,150 TV shows. But this pales in comparison to American Netflix which has a whopping 4,112 movies and 1,820 TV shows available.

Given that German Netflix charges broadly the same monthly subscription charges as its American counterpart, it will come as no surprise to learn that there are also a growing number of local and ex-pat Netflix fans who are keen to stream from the US service instead.

It is actually quite easy to do this. All you really need is a VPN. In this article, we will be explaining exactly how to do this and also revealing the results of our exclusive tests on which VPN is best for unblocking American Netflix in Germany.

Quick Start Guide: How to Watch American Netflix in Germany

For those who just want to start streaming, we will begin with our Quick Start Guide. All you need to do to start watching American Netflix in Germany is to follow these few simple steps:

It’s as simple as that! The only big decision you have to make is deciding which VPN to use. But we can help you there too. We have tested all the best VPNs to see which works best at unblocking American Netflix. To find out which provider we recommend, just keep reading.

Why Is American Netflix Different From German Netflix?

The reason why American Netflix has such a bigger content library than German Netflix comes down to an issue of rights.

Like all streaming companies, Netflix has to buy up the rights to all of its content. These rights are sold by country and competition can be fierce. Netflix has deep pockets but it doesn’t win every auction.

As a result, Netflix only holds the rights to show some shows and movies in some countries. This means that every Netflix service in every country around the world is different.

Netflix is an American company and launched there first. It has therefore been buying up rights for content in America for longer and as a result, has a far larger content library to offer its subscribers there.

Netflix has a duty to stop people from accessing content in countries where they don’t hold the rights. As a result, they use a technique known as geo-blocking to check where every visitor to their website comes from.

They do this by looking at your IP Address. An IP Address is like your computer’s home address and tells every website you visit where you are connecting from.

If Netflix sees from your IP Address that you are located in Germany, they will automatically direct you to the German Netflix site and prevent you from accessing any other national sites.

It’s an effective system. But there is one flaw. It is very easy to trick if you use a VPN.

A VPN or Virtual Private Network is an online security and privacy tool. Most people sign up to protect their online data from surveillance or ensure their online privacy. But a really useful side effect of a VPN is accessing geo-blocked websites.

A VPN can do this because when you are connected, it redirects all of your online data through an external server. When it does this, the IP Address your data is tagged with is changed to the IP Address of the VPN’s server.

This is crucial. Because VPNs operate server networks all over the world, if you connect to a server in the USA, your data will be tagged with an American IP Address. If you then try to visit the Netflix website, it will think you are located in the US and so redirect you to their American service.

In this way, it is quite easy to unblock American Netflix in Germany or, for that matter, anywhere else in the world too.

It tries too. Netflix knows people use VPNs in this way and so do the rights holders they buy from. This is why Netflix is pretty vocal about the fact that it strives to block access to all VPNs.

But the truth is that they have only enjoyed limited success so far. Their problem is that blocking VPNs is extremely difficult. The only way to do it is to identify and block every individual IP Address used by every VPN server.

But VPNs can counter their efforts by changing IP Address or hiding them from Netflix. The result is a game of cat and mouse and some VPNs have managed to stay in front.

There are plenty that have given up and can no longer unblock Netflix. But many still can, and these are already used by many people in Germany and elsewhere to unblock American Netflix.

What Is the Best VPN to Watch American Netflix in Germany?

We come to the question everyone wants to know the answer to. Which VPN works best at unblocking American Netflix in Germany? We have tested all of those that still work with Netflix against several different criteria.

The results are now in and our recommendation for the best VPN to watch American Netflix in Germany is ExpressVPN.

There are several different reasons why ExpressVPN is our top recommendation:

There is no doubt that American Netflix offers a much better all-round package than German Netflix. This is why so many Germans and ex-pats are keen to sign up to the American one instead.

It’s very easy to do this with a VPN and our tests have shown that ExpressVPN is the best VPN to choose. In this article, we have explained exactly what you need to do it. Have you tried to unblock American Netflix in Germany? If so, why not let us know how it works for you.