How to Watch American Netflix in Ireland 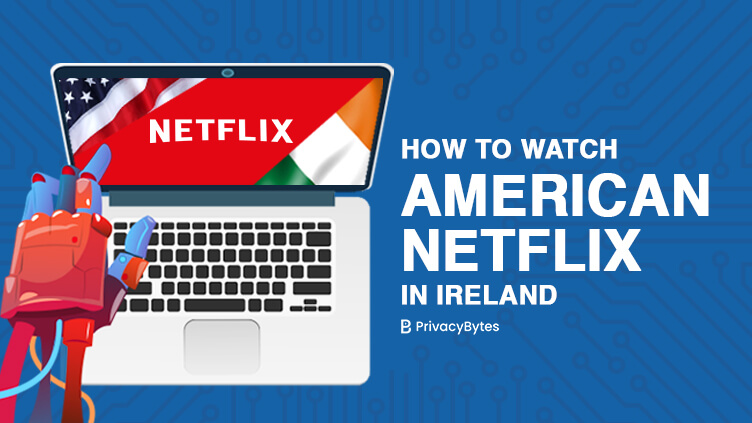 Netflix has very quickly become a big deal in the Republic of Ireland. A recent survey found that Ireland was third in the world for Netflix subscriptions behind the USA and Canada.

An estimated 500,000 Irish households have Netflix subscriptions according to the country’s official communications regulator. With Ireland having an estimated 1.42 million households, that represents 42% of the country.

This popularity comes in spite of the fact that Irish Netflix carries considerably less content that the service in some other countries.

It has been estimated that Irish Netflix had around 500 fewer movies than its American equivalent and more than 150 fewer TV shows. Given that a standard Netflix subscription in Ireland costs €10.99, pretty much the same as the US price of $12.99, this is not a great deal.

Little wonder then that a growing number of Irish Netflix fans are looking for ways to watch American Netflix in Ireland.

It’s actually pretty easy to watch US Netflix in Ireland with the help of a VPN. In this article, we will tell you exactly how to do it as well as recommending the best VPN for the job.

Quick Start: How to Watch American Netflix in Ireland

Before delving into the detail, let’s begin with a quick start guide that will allow you to start watching American Netflix in Ireland in less than 5 minutes:

That’s all there is to it. If you want to know more, including which VPN works best with American Netflix, just keep reading.

Why Is Content on American Netflix Different From the Irish Version?

The differences between Netflix’s different services all come down to an issue of rights. Except for shows Netflix produce themselves, they are required to buy the rights to everything they stream.

There is always competition for these rights from other platforms and that means Netflix doesn’t hold the rights to stream every show in every country. As a result, every national Netflix service has a different catalog of movies and TV shows available.

Some content can be seen on Irish Netflix that you can’t watch on the American version. But there is far more that can be found on the US service that Irish viewers are missing out on.

You can see what other shows you are missing out on in Ireland here at unogs.com.

Why Can’t I Watch American Netflix While in Ireland?

Netflix is not allowed to stream content in countries where it doesn’t hold the rights. As Netflix has grown in popularity, rights holders have put increased pressure on them to enforce this properly.

They, therefore, use a technique known as geo-blocking to analyze their users IP Addresses and determine which country they are connecting to the internet from. An IP Address, if you aren’t sure, is like the home address of your computer.

If your IP Address tells them you are Ireland, Netflix will only let you access the Irish version of Netflix.

How Can I Stop Netflix From Blocking My Location?

It’s actually very simple to get around this geo-blocking technique. All you need is access to a Virtual Private Network or VPN.

A VPN is an online security and privacy tool which works by redirecting all of your internet data down an encrypted tunnel and through an external server before it heads off to the websites or services you are visiting.

This does a few things. It encrypts your data to stop anybody else being able to see what you are doing online. And when your data passes through the server, your own IP Address is replaced by the IP Address of the server.

This makes it look as if you are connecting to the internet from wherever this VPN server is. Most VPNs have a network of servers in many countries and all offer a range of servers in the USA.

By connecting to an American server, Irish internet users can make Netflix think they are located in the USA, enabling access to US Netflix.

It tries to for sure. In 2016, they announced their global expansion and at the same time said they would be blocking access to VPN users to try and ensure users only watched their local Netflix service.

They have worked hard to make this a reality and, to be fair, they have enjoyed some success. But the only way to block VPNs is to manually identify and block every IP Address associated with every VPN.

This is a mammoth task that includes millions of IP Addresses. There are also several ways that VPNs can frustrate them, such as changing IP Addresses and masking their true identity.

Several VPNs have done this, but there are many VPNs that cannot unblock Netflix. These do all change a small subscription fee. But it is a small price for fans who want to access the best Netflix possible.

What’s the Best VPN to Watch American Netflix in Ireland?

We have gone out of our way to test all the VPNs which claim to be able to unblock Netflix to see which works best in Ireland. Those tests showed that there was one VPN that stood head and shoulders above the rest.

The best VPN to watch American Netflix in Ireland is ExpressVPN.

There are a few things which make ExpressVPN the standout VPN for Irish Netflix fans:

American Netflix has a lot more going for it than its Irish equivalent. There are more movies and TV shows for a broadly similar price.

Whether you are a US expat living in Ireland or an Irish citizen who wants a better streaming service, there are lots of reasons to want to watch American Netflix in Ireland.

With a VPN, you can. ExpressVPN is the best tool for the job. Give it a try and let us know how it works for you.