How to Watch American Netflix in Italy 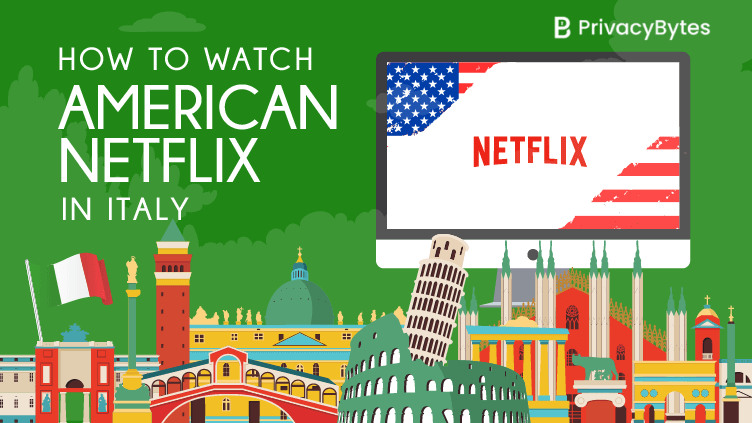 Since Netflix launched in Italy in 2015, it has built a credible subscriber base.

Recent estimates suggest that there were as many as 1.5 million subscribers at the start of this year. That number is expected to rise to as many as 2 million by the end of 2019.

But the truth is that they are signing up for a much inferior service than people in some other countries. Italian Netflix currently offers around 2,300 movies and just 900-odd TV shows. In comparison, American Netflix has well over 4,000 movies and more than 1,800 TV shows.

It is a big difference, especially when you consider that Italian Netflix subscribers are paying broadly the same monthly subscription rates as their US counterparts.

Fortunately, they can as long as they sign up for a VPN first. In this article, we will explain exactly how to do this as well as tell you the results of our exclusive tests which reveal the best VPN for watching American Netflix in Italy.

Quick Start Guide: How to Watch American Netflix in Italy

If you want to cut through the details and just get watching, we will begin with the most important section for you. Below you will find our Quick Start Guide. Just follow these few simple steps to start watching American Netflix in Italy in no more than a few minutes.

That is honestly all there is to it. The only tricky bit for you is deciding which VPN to use for the job. But we can help there too. Just keep on reading and you will find out which VPN we recommend for unblocking American Netflix in Italy.

Why is American Netflix Different From Italian Netflix?

There is a very good reason why Italian Netflix has a much smaller catalog of content than its American equivalent. It all comes down to the issue of rights.

Netflix has to buy up the rights to all the tv shows and movies it doesn’t produce itself. These rights are sold by country and there is always fierce competition from Netflix’s international rivals and local streaming services too.

Inevitably it wins some rights, but not others, and the result is that there is different content available in every Netflix service location.

Netflix began its life as an American service, and it is, therefore, no surprise that they have managed to buy up more rights in American than they have in other countries. They hope to change that in time, but for now, the blunt truth is that American Netflix has much more to offer than their service in almost every other country.

Those who sell the rights to TV shows and movies are very keen for these rights to be protected. That means they require Netflix to try and stop people watching their service from other countries.

To do this, Netflix uses a technique known as geo-blocking. When you visit the Netflix website, Netflix will take a look at your IP Address. An IP Address is like a home address for your computer.

If your IP Address tells Netflix you are located in Italy, they will automatically redirect you to their Italian service and block you from accessing American Netflix and any other Netflix too.

It is a simple but pretty effective system. But there is one glaring loophole that anyone can exploit if they use a VPN.

A Virtual Private Network or VPN is an online security and privacy tool. Most people use it to stay safe online or access the internet in countries where governments seek to monitor and control what individuals can see or do online

A VPN works by redirecting all of your online data through an encrypted tunnel. This keeps it all secure and stops any prying eyes from seeing what you are doing online.

It will also pass all your data through an external server. This helps you to stay private online, but a side-effect is that it also allows you to get around geo-blocking too. This is because when your data passes through that server, it is tagged with the server’s IP Address in place of your own.

As a result, it is possible to unblock American Netflix in Italy or any other country in the world too.

We get asked about Netflix’s claim to block VPN users a lot. It is certainly something they try to do, but the truth is that their efforts only have a limited effect.

The problem for Netflix is that the only real way to block VPNs is to identify and block every IP Address they use manually. For every VPN, this would number in the millions.

Some VPNs have not bothered to battle back, so Netflix has managed to block them. But others have put up more of a fight. It is quite easy for them to either change the IP Address or hide them from Netflix.

This means that there are still plenty of VPNs that are able to unblock American Netflix in Italy and almost any other country in the world too.

What Is the Best VPN to Watch American Netflix in Italy?

The other question we get asked a lot is which VPN is best for unblocking American Netflix in Italy. To try and get a categorical answer, we have tested all the main VPNs to see which is best for the job.

The results are now in and our recommendation for the best VPN to watch American Netflix in Italy is ExpressVPN.

There are a few different ExpressVPN features which made it stand out in our tests:

If you want better value from Netflix you need to be watching their American service, and from Italy, you will need a VPN to do it. ExpressVPN is the best VPN to choose as it offers all of the features you need and more.

In this article, we have explained how to use ExpressVPN to unblock American Netflix in Italy and why it is the best to use. So, why not give it a try today and let us know how it works for you.