How to Watch American Netflix in the Philippines 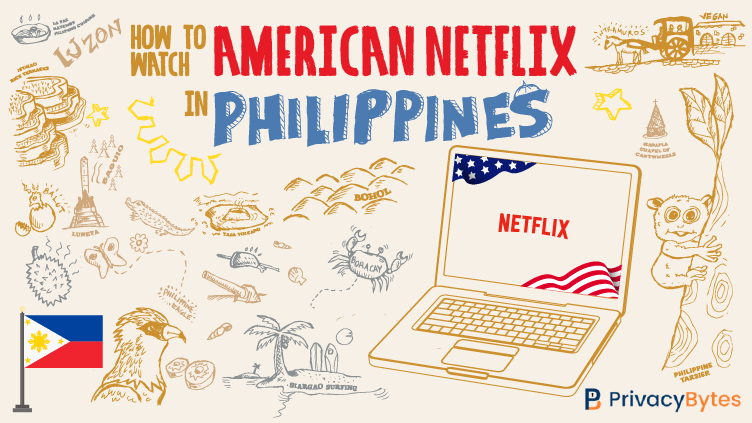 Netflix launched in the Philippines back in 2016. Since then, it has made what can generously be described as modest inroads into the market.

In 2018, it had an estimated 104,000 subscribers. This is predicted to triple in the next two years but is still a drop in the ocean in a country with a population of more than 100 million.

Subscribers in both countries pay the same amount of money. As GMA News has pointed out, this means that Filipino Netflix users pay 28% more per title than their US counterparts.

Little wonder then that a growing number of Filipinos and ex-pats are keen to start streaming American Netflix.

This is actually easier than you might think. All you need is a VPN, and in this article, we are going to explain how to unblock American Netflix in the Philippines and the best VPN to do it.

Quick Start Guide: How to Watch American Netflix in the Philippines

We’ll begin with the easy part. For those who just want to get straight to watching American Netflix in the Philippines, here is a simple step-by-step guide to help you do just that:

The only real decision you have to make is which VPN to use. Don’t worry. We can help there too. We have carried out exclusive tests to find which VPN is the best to use. To find out which is our number one recommendation, just keep on reading.

Why Is American Netflix Different From Philippines Netflix?

The difference between American and Philippines Netflix all comes down to the issue of rights.

Apart from the shows and movies it makes itself, Netflix has to buy up the rights to all the other content they stream. These rights are generally auctioned off by country to the highest market. Netflix is a big market player but not the only one, and they don’t always win the rights to everything.

As a result, Netflix has ended up with a different library of content for every country it operates in. It has been in the US the longest, so it stands to reason that they will hold more rights for that country than anywhere else.

Netflix dreams of a day when they have the rights to show everything everywhere. But that reality is some way off at the moment.

Why Can’t I Access American Netflix in the Philippines?

Rightsholders insist that Netflix only allow users to watch content in the countries where they hold the rights. This means that Netflix has to stop users from accessing the services of other countries.

They do this using something called geo-blocking. Geo-blocking works by looking at the IP Address of every visitor to their website. An IP Address is like your computer’s home address. It tells Netflix exactly where you are connecting from.

If your IP Address tells Netflix you are in the Philippines, you will be automatically redirected to the Philippines Netflix service. All other Netflix sites, including American Netflix, will be blocked.

It is a technique that works well. But there is one glaring loophole that allows users to get around this block.

To evade Netflix’s geo-blocking, you will need a Virtual Private Network or VPN. A VPN is a simple online security tool used by most people to stay safe and private when using the internet.

A VPN will redirect all of your internet data down an encrypted tunnel and then through an external server before it heads off to the websites you want to visit. When it passes through this server, the data is tagged with the server’s IP Address rather than your own.

This helps to ensure online privacy. But a side effect is helping users to access geo-blocked sites. VPN’s operate servers all over the world. By connecting to a US-based server, you are tagging your data with an American IP Address.

This means that when you visit the Netflix website, you will be redirected to the US site rather than the Philippines one. Once there, all you have to do is log in and start watching.

It tries to. Netflix is well aware that VPNs can be used this way and in their efforts to appease the rights owners they rely on, they have made efforts to block VPN users.

But the truth is they have only enjoyed limited success. Blocking VPNs is time and resource-intensive. The only way to do it is to identify and block every IP Address associated with every VPN. There are many millions of these!

There are also ways that VPNs can get around these efforts. Some will regularly change IP Addresses. Others will use different techniques to hide their IP Address so Netflix cannot identify them.

The result is that while some VPNs have given up the fight, many more are still able to unblock American Netflix in the Philippines with ease.

What Is the Best VPN to Watch American Netflix in the Philippines?

His research has shown a clear winner. Our recommendation for the best VPN to watch American Netflix in the Philippines is ExpressVPN.

There are several important reasons why ExpressVPN is our top pick:

The Philippines Netflix service is a pale imitation of its American equivalent, which is why so many Filipino and ex-pat users in the country want to unblock US Netflix instead.

With a VPN, you can. ExpressVPN is the best one for the job. In this article, we have explained why and told you everything you need to know to get things up and running. Give ExpressVPN a try today and let us know how it works for you in the comment box below.