How to Watch Canadian Netflix in the US, UK or Anywhere 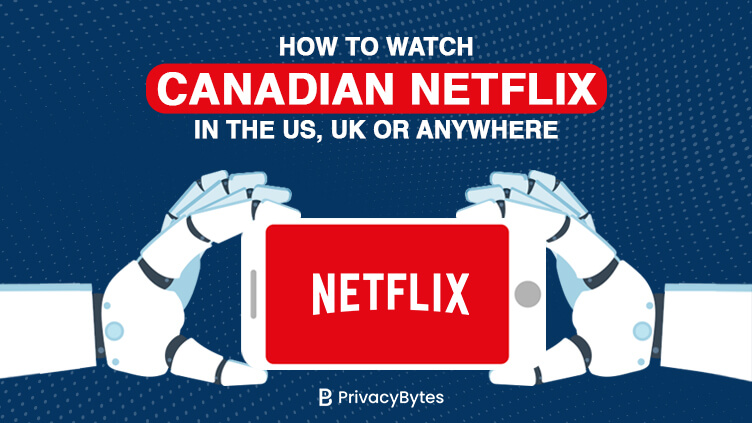 Canada is awesome! It’s the birthplace of hockey, home to half the Niagara Falls, and definitely the place to go for maple syrup. Do you know what else Canada has? A kick-ass Canadian Netflix catalog of movies and TV shows not carried in the US.

For example, Star Wars Episode VII: The Force Awakens is only available on Netflix Canada at the time of writing. There is plenty of exclusive Canadian-made content available too.

Netflix has been beefing up its Canadian service… and then some. Data now shows that Netflix Canada now has the third largest Netflix catalog on earth with more than 5,500 movies currently available. That is just slightly behind the USA (around 5,700) and global leader Japan.

While it is US Netflix that gets all the focus, the fact is that Canadian Netflix has some fantastic Canada only content and a growing number of people around the world are interested in accessing it. In this article, we explain exactly how to do that, from the US, UK, or anywhere else for that matter. All you need is a VPN and, as you will see, ExpressVPN is the best one to use.

Why Is Canadian Netflix Different From American Netflix?

On the face of it, when you visit the Canadian Netflix homepage, it looks much the same as any other. But just like buying a car, it’s what’s under the hood that really counts.

There are now dedicated Netflix services available for just about every country on earth. But all these services are different.

This is because Netflix has to buy up the rights to all the TV shows and movies it streams. These rights are sold by country and while Netflix would love to buy the global rights to everything, competition from the likes of Amazon Prime and many local streaming platforms makes this impossible.

As a result, Netflix has the rights to show some content in Canada, but not the USA and elsewhere in the world.

Because rights are sold by country, Netflix has to stop people located in different countries from being able to access overseas Netflix platforms. If it didn’t, it would effectively be pirating the content and would certainly be in breach of its contractual obligations.

It does this using a technique known as geo-blocking. Sounds complex I know, but actually the concept of geo-blocking is surprisingly simple.

Netflix uses this IP Address to work out which users are in which country. It directs them to the right service for their geographic location and blocks access to all the others.

What Netflix isn’t so keen for you to know is that it is just as easy for you to evade their geo-blocking as it is to block you in the first place.

All you need to do this is a VPN (Virtual Private Network). A VPN is primarily an online security and privacy tool. But the way it works has a number of other advantages too.

When you use a VPN, all of your online data is encrypted and then passed through an external server. It is the second part of this process which helps you get around Netflix geo-blocking.

When your data passes through another server, your IP Address is replaced by the IP Address of that server. VPNs have networks of servers around the world which means it is possible to spoof your geo-location and fool Netflix into letting you access platforms from other countries.

For example, if you connect to a VPN server in Canada when you try to log into Netflix, you will automatically be redirected to their Canadian platform. No matter where in the world you happen to be.

It certainly tries to. Netflix is well aware of this VPN technique and has pledged to stamp it out. In fairness, they have done pretty well, but trying to stop all VPN traffic is like stamping on an ants nest and then trying to catch every ant that comes that. There are just too many and they are too fast and too clever.

The only way Netflix can block VPN traffic is by manually identifying and blocking all IP Addresses linked to VPNs. But there are a lot of VPNs and most don’t want to be stopped.

So, while Netflix has succeeded in blocking quite a few VPNs, the very best VPNs out there have succeeded in keeping their IP Addresses hidden from Netflix. In other words, these VPNs can still unblock Netflix.

What Is the Best VPN to Watch Canadian Netflix Anywhere in the World?

We have taken a look at all of the VPNs still able to unblock Netflix to test which is the best for watching Canadian Netflix in the US, UK, or Anywhere. There are a few that are up to the job, but the best by far is ExpressVPN.

ExpressVPN offers a combination of various features which makes it ideal for watching Canadian Netflix. These include:

Netflix Canada has come on in leaps and bounds in recent years and is a service worth unblocking these days. As we have shown, if you choose ExpressVPN, then it’s still quite simple to do.

This article should contain all the information you need to get Canadian Netflix up and running no matter where you are in the world. Have we missed anything out in our tests? Have you had any different experiences which our readers might benefit from? Any questions we haven’t answered here already?

We always welcome comments, questions, and feedback from all readers and we will do our best to respond to all of them.